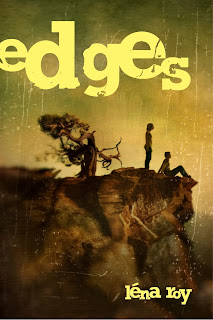 Seventeen-year-old Luke lives and works at the Moonflower Motel in Moab, having fled New York City where his father Frank drowns his sorrows after the death of Luke’s mother. Back in New York, eighteen-year-old Ava meets Frank at an Alcoholics Anonymous meeting. When these lost souls converge in Moab, what happens transforms them all.


"This book holds so much-- the need to escape, the need to be found, the way distances between parents and children expand and contract, the way grief can swallow will, the way redemption comes in fragile and faltering steps. Lena Roy handles the parallel narratives like a pro; the characters are so true they make your heart hurt." - Judy Blundell, 2009 National Book Award Winner.


"Roy’s first novel succeeds at its nicely realized setting and multidimensional, sympathetic characters who will hold readers’ attentions to the end." - Booklist

"After the death of his mother, Luke’s father returns to alcohol after a long sobriety and is fast losing control of his life. Frustrated with having to take care of Frank and dealing with his own grief, 17-year-old Luke flees New York for Moab, UT, where he and his parents took frequent trips. He finds a job at the Moonflower youth hostel and lives among the travelers and free spirits. Ava, a student at Barnard, is learning to come to terms with her own alcoholism in an AA program that Frank attends. She hasn’t spoken to her parents since they sold her childhood home in Ohio to buy the Moonflower. After Ava saves Frank’s life, the two of them, along with their friend Charlie, decide to go to Utah. The story is told in Luke’s and Ava’s alternating points of view and broken into sections spanning five days of their lives, starting on a Friday and ending roughly a week later. In that time, the teens search for a higher meaning in life in the red rock, spires, and canyons of the area and the tenets of the AA 12-step program. The teen characters are well defined, particularly Ava, and the author deftly evokes a mystical Moab setting." - School Library Journal
Buy on Amazon
Or better yet, IndieBound!