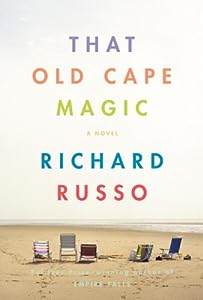 Cover of That Old Cape Magic
How does Richard Russo do it? How does he keep writing fiction about middle-aged cranky men that I can't put down? I was introduced to him via Empire Falls about ten years ago, and then, raiding my mother's library, devoured all of his others, riveted by his bittersweet, comic, tragic portraits of our human condition. (Straight Man is about a man in his 60's with a prostate problem, yet I was not only intrigued, I was able to relate.)

I picked his latest up at the Katonah Library the other day, not caring what it was about, just knowing that I would be in for a treat - Russo succeeds in seamless writing - creating the universal human experience through the multi-dimensional details of a specific character. The "plot" is simple: Jack Griffiths has to scatter the ashes of his parents and he can't seem to do it. The backdrop is two different weddings, where Griffiths weaves in and out of his memories.

I always wonder about book titles, since I had such an interesting relationship with mine. Is a deeper meaning reflected in the title, is it catchy for marketing purposes, or both? The reason for title of the book is revealed at the beginning: Griffiths and his wife are going to a wedding on Cape Cod, and he is flooded with memories of summers spent there with his parents. Every time they drove over the Sagamore they would make up a song to the tune of That Old Black Magic, singing, That Old Cape Magic instead. (Kept me reading too, because I sang that song to my own husband at our wedding . . . That old black magic has me in it's spell, that old black magic that you weave so well, those icy fingers up and down my spine, that same old witchcraft when your eyes meet mine . . . but this is another subject!))

Griffiths is "congenitally unhappy", but is he? Is that the inheritance he is carrying around in urns in the backseat of his car to two weddings? He is also strangely but passively looking for moments of grace. He is in crisis, but we root for him to change his perspective.

Just wanted to share my thoughts as I finished the book this morning. Now I promised my kids that I would finish reading them Harry Potter and The Sorcerer's Stone! (We've had LOADS of read-aloud time this week!)