Why I Wrote EDGES, take 1 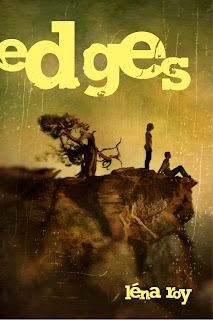 This is WAY too long for an Author's Statement, but I thought I would share with you my first draft. The problem is, I've cut so much already! And I will have to keep cutting. "Less is more," I keep hearing my editor say . . . but in the interest of sharing my journey, here goes . . .

EDGES was borne out of spending a year in Moab, Utah. I had never heard of Moab before I went out west from New York City on vacation with a friend, staying at the Lazy Lizard Youth hostel where I met a cast of characters, including the man who would ultimately become my husband.

The landscape called me to change my life, pushing me to lobby hard to find a job so that I could move from the Upper West Side of New York City to this surreal place of barren earth and red rocks. It was meant to be: Four Corners Community Mental Health Center needed someone to help start up an intensive out-patient program for teens.

To get on my feet, I stayed at the youth hostel where I had made some friends. Besides my future husband, there was a charismatic 16- year-old boy who had pitched a tent in the back and was ostensibly "living" there. Nobody knew his real story, and one day after a long hike, I found out that the boy had left. I’ve wondered about him ever since.

My work that year with the teens was all-consuming. I remember being naively shocked when I had a 14 year-old charge come into see me for shooting crystal meth. She wound up in the hospital and an in-patient program. Most of the teens I worked with were court-ordered; it was all intervention and no prevention. My faith in love and the universe was sorely tested treating these young men and women who were only seeking a way to transcend a hum-drum existence: drugs and alcohol replacing a Higher Power.

Years later, back in New York City, after more work with teens and taking care of the first two of my three children, the boy from the youth hostel figuratively tapped me on the shoulder and whispered the first scene of EDGES. I wrote furiously as if taking dictation. I called my protagonist Luke, and he was running away from his mother’s death and father’s alcoholism in New York City to a youth hostel in Moab, Utah.

The first draft spilled out in three months, but then I had to work on my craft and keep revising until I got it right. At first I was obsessed with the crystal meth problem. I found a lot of books with graphic depictions of addiction, but nothing about the journey beyond drug/alcohol induced behavior. It became more interesting to ask questions: what happens when you take away the substance? Or, if like Luke, you just run away? What does it take to be authentic, maintaining a sense of who we are when our perceptions of the world are constantly challenged?

We write to understand the world, at least I do, and EDGES came out of a need to find hope in a sometimes bleak world, hope in a time where it's so easy to go over the edge, and somehow more difficult to find your own personal edge - stretching yourself and your mind beyond what you thought possible.

I am glad that EDGES will find it’s way to a teen and adult audience. It is my hope that it will make people think about their relationships to addiction and transcendence, that it will serve as one of many road maps along the way to adulthood, and comfort to ones who are already there.