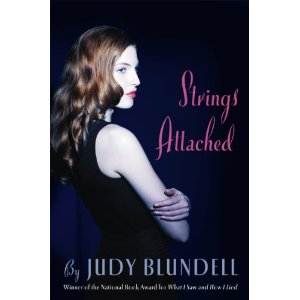 I am having an incredibly hard time writing this post. Words are not tumbling forth from my consciousness in an organized way. Perhaps that's because I am about to review a friend's book and I am intimidated; I want to do it justice. After all, I had the privilege of reading it before it's release date on March 1st. And I offered to read it with an actor's eye, to help the author choose scenes for a dramatic reading with other YA Greats at an event during Teen Author Week in mid-March. Why am I erasing everything I write?

There are no "strings attached" to my friendship with  Judy Blundell, (ba-dum-dum). And yet it's no secret that I adore her. However, I wouldn't write about her work if I didn't love it, so let me just dive in.

Meet Kit Corrigan, a seventeen year old who flees Providence,  Rhode Island for the neon lights of Broadway where she lands a job as a chorus dancer.

The year is 1950. Kit is hungry, in ALL senses of the word, and she accepts a free place to live from her boyfriend's father with "no strings attached." And of course there are. Judy brings the reader along by slowly revealing Kit's past through flashbacks, layering the motivation and just why there are strings attached. Judy is as much a master at revealing character through dialogue as she is at creating a ladder of suspense, of mystery. She writes in a style that is achingly true to the time period.

I watched the movie in my mind as I was reading it. It's got everything actors would want: strong characters, nuanced conflict and snappy dialogue.

I couldn't help but think about my grandparents all though the book. When I was a young, I used to fantasize about the theater. I wanted to be an actress, yes, but I didn't want to be a modern actress, oh no. I wanted to be a 1940's starlet.

My grandparents met on Broadway, in Chekhov's The Cherry Orchard. (You can read about their love story and life in the '40's in Two-Part Invention, by Madeleine L'Engle.) At their house in Connecticut they had an entire hallway devoted to head shots of their actor friends from the 1940's. It was so incredibly glamorous! My young heart was filled with dreams of the stage and film, obsessing over everybody from Katharine Hepburn to Marilyn Monroe. (And yes, there was a photo of Kate!)

Is it any wonder that Judy had me at 1950? And that I would be seriously excited because I fell in-love with her writing after reading What I Did and How I Lied, set in the mid 1940's? Strings Attached is written in the first person, and I was able to put myself in Kit's shoes - I was able to live vicariously through her.

I just wish that I could pass for seventeen, so I could play Kit in the movie adaptation.