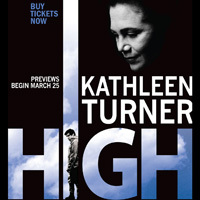 I had the chance to see High the other night - a Broadway play with Kathleen Turner (love her) about "addiction and redemption" - two of my favorite subjects. My BFF had scored us free tickets for a preview performance (the show opens on Tuesday) through a contact at work. (She is an awesome psychotherapist, if you will allow me to brag!)

Our seats were amazing - second row center, and I left the theater completely disturbed. Which is not a bad thing. I esteem work and art that encourages an inner dialogue with self. I had "wanted" a different outcome to the story, a different ending - so it gave me a lot to think about, as someone who believes in the power of prayer and faith (not just inside of organized religion).

And I want you to see it, so I won't "spoil" anything for you by telling the story. Well, the whole story. (I have to tell a little bit, don't I?) To just say that the performances were "gripping" or "powerful" wouldn't do it justice.

Turner plays Sister Jamison, "a foul-mouthed alcoholic nun" who lives and works in a Catholic rehabilitation center. The play opens with Sister Jamison telling the audience a vignette from her childhood - she reads a story to her little sister every night about the stars, because someday, her sister says, she wants to be HIGH, to go and be "up there".

Turner had me right there, as I truly believe that we are all spirit seekers of one form or another. We all want to be High up in the stars, transcending the human experience.

The play, centered around three characters is peppered with Sister Jamison breaking the fourth wall with these monologues, revealing more about her childhood and her relationship with her sister, her own need for redemption.

Sister Jamison's "job" is to run groups for recovering alcoholics like herself. Her boss,  "Father Michael" played deftly by Stephen Kunken, asks her to take on an seemingly impossible case - a-damaged-beyond-repair 19 year old drug meth addict and prostitute named Cody. Sister Jamison knows first hand that  recovery is for those who want it, and are willing to work for it. Cody is not an addict pre-disposed to want to get better. He needs to be in a lock down rehab for six months, if there is to be any hope.

But Father Michael challenges her to think outside the box, that "miracles" are up to God, and come in different forms, that it is not up to us to decide who can recover and who can't.

Sister Jamison doesn't want to get emotionally involved with this kid. Yet she does, which of course brings up her own demons.

Evan Jonigkeit as Cody broke my heart. Sitting so close to the stage, his pain and trauma were absolutely convincing. The word "brutal" kept floating through my mind and I couldn't help but think of the uncle I have lost to alcoholism and the friends I've lost to addiction. Are they "high" up with God now? What do I really believe?

Sister Jamison tries to introduce Cody to some kind of faith, and teaches him the rosary.

"What has God ever done for me?"

"God hasn't done this to you, people have," Sister Jamison says.

Yes, people have. But recovery can only happen when a person can say: "yes people have done this to me, but I can make different choices now. I can take responsibility for my part in the past and in my present and future actions."

This is impossible for Cody. So what do you think happens? Why was I such a wreck afterward?

I guess I saw all of the "addiction" and none of the "redemption". More's the pity.