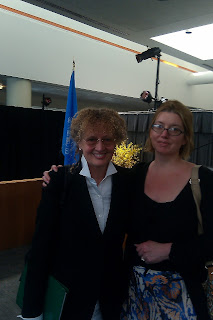 Tuesday I got an email from my sister Charlotte with the headline: WIT and UN. In the body of her email was: This is incredibly last minute and I'm not really sure what it's about, but do you want to come with me? Following was an invitation to a luncheon at the United Nations with Mary Pope Osborne as the special speaker.


Hells yes! Lunch with my sis at the United Nations AND Mary Pope Osborne, famed writer of The Magic Treehouse series?

I was confused about how A Wrinkle in Time would be involved -  we use WIT as Wrinkle shorthand, and as the 50th anniversary is coming up in February 2012, it is very much on our minds.

All became clear later that evening when we realized that WIT is an acronym for World Information Transfer. (Evidently, Wrinkle doesn't tie into everything!) It is a yearly conference on nuclear energy, created after Chernobyl and ever more important after the recent disaster in Japan.

Yesterday I met Charlotte near the United Nations and we made our way in through the maze of security- we even needed an escort!

It took us a good twenty minutes to find the delegates dining room, but find it we did. We were seated with folks from Random House, John Patterson (Katherine Patterson's son) and Will Osborne (Mary's husband). I turned to introduce myself to the person on my right when she said:

"Léna! I know you! I'm Mallory, Yeardley's cousin!" My eyes opened wide with joy and recognition. Yeardley and I went to Barnard together, and Mallory and I had hit it off a few years ago at Y's baby shower. It turns out that Mallory is Mary Pope Osborne's editor! The last time I saw her she was pregnant with her second child, and now she s pregnant with her third! I LOVE stuff like that!

It also turns out that Mary and Will live five minutes away from my mom in Goshen! Lot's of synchronicity . . .

Mary gave an amazing speech on the power,  gift and right of reading for every child, especially those impoverished or who have suffered global trauma. (I wish I had the speech in front of me to quote it, but it hasn't been downloaded yet!) She was so inspiring! I am always pontificating on the power of writing and creating, and it was wonderful to have a reminder of the power of reading. (There is so much to say about it. I promise to provide a link when I get it!) 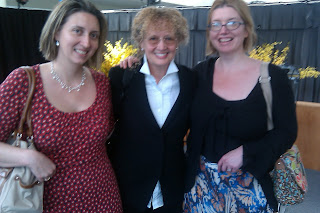 Afterward, Mallory introduced Mary to us, and she couldn't have been more gracious and down to earth. In fact, she shared a lovely memory of my grandmother: when Mary started going to Author's Guild meetings a long time ago and was so intimidated by everyone, my grandmother talked to her and made her feel comfortable.

Mary herself couldn't have made us feel more comfortable, and grateful that we had heard her speak. (Plus, it bumped up my cred with my kids, BIG time!)
Posted by Unknown at 11:25 AM