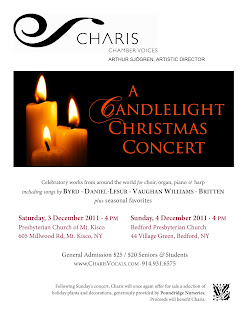 Happy Monday everyone. Today's post is about how I found myself involved in a Christmas Concert with CHARIS, "the finest vocal group in Westchester" . . .

We say yes for many different reasons (besides not being able to say no.) My biggest reason for saying yes is to help my community (friends)  and to stretch myself as a person.

However, saying "yes" can be uncomfortable, and sometimes I wonder what I have gotten myself into.

"We are desperate for a narrator for our Christmas concert," Amy said to a group of  mutual friends a couple of weeks ago. This was the first time I had heard Amy talk about singing, let alone that she was part of a choral group. And I don't want anybody to be desperate. I mean, I know how to read aloud, don't I? Isn't that what a narrator does?

"Maybe I can do it," I offered, and immediately Amy jumped on my words. It snowballed, and I got way out of my comfort zone.

I had no idea that the choral group Amy is involved with, Charis, would be comprised of over thirty singers, tenors, sopranos, altos and baritones and artistically directed by Art Sjogren. I had no idea they would be so professional. I don't know what I expected - a rinky-dink choir? I didn't think, I just said, "yes I can." I've read in church many, many times. (Of course, I haven't done it in years, but isn't it nice that my impulse was to engage instead of to cower?)

I was to play the part of "narrator" during a choral piece called Annonciation by Frenchman Daniel-Lesur's.  There were no long monologues, I just had to know when to be able to come in on the music. Oh, just that. Challenge #1. Gulp. Now that I have never done before.

I managed to go to one rehearsal immediately following a workshop and was stunned by the singers. I had actually been thinking of auditioning until I heard them. You want me to sing Mack the Knife? I'm your gal. But these folks aren't amateurs. I didn't want to embarrass them.

Then there were the performances this weekend.

Saturday was a FULL day, and I squeezed this concert in between events. I didn't have time to think about it, let alone be nervous, but then, during one of the parts of my narration, I started struggling with a cough.

And then I coughed once during a soprano's solo and . . . don't worry, I made myself stop. Have you ever tried to stop a coughing fit? (You end up crying instead, which I guess is apropos for the Annunciation.)

But still, I did not feel great about my performance. Coughing is not cool. (I kept thinking that it had been hubris to say "yes".)

I ran out to make the Christmas Tree lighting in Bedford Hills, where my son Finn was singing in the chorus. (He was delicious.)

Sunday I didn't have to rush around or be anywhere else, so I could just focus on the concert. My mom drove down from Connecticut, and my 6 year old daughter Scarlett came too. I had time to be nervous, but also was able to arm myself with throat lozenges and water.

No coughing, my voice was loud, measured and clear. I rocked it. The singers were just phenomenal.

So. Moral of this story? Get out of your comfort zone. Just do it. And if you live near Westchester, do yourself a favor and come to one of Charis' concerts. (It's not just church-y stuff. :0)

And now I have to focus that moral on exercising more regularly. NaNoWriMo coupled with not having time to work out has wreaked havoc on my back. Just do it. Heh, heh, heh.
Posted by Unknown at 3:18 PM