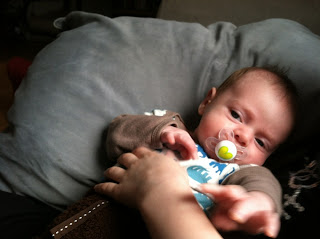 In ancient traditions, naming is an act of magic, of calling into being. It is no different with a baby.

This particular baby is my godson, James Oscar Rainwater Clemeno and I had the honor of going to Western Massachusetts this weekend to participate in his baby naming ritual, called a "saining" in the pagan community.

His parents, Amanda and Kirok, both chose to live in the Hilltowns because of this community, rich in both friendship and ritual.

Amanda and Kirok have an older daughter who is two years old, Amanda Grace, and she has two godfather's - both are the blood brother's of her parents. For James, they wanted to have two godmothers: Kirok's sister, and me, a soul sister.

Amanda is one of my oldest and dearest friends, having lived many lives both with and without me. We met first at Barnard, and then reconnected on the Upper West Side of Manhattan almost twenty years go. Our interest in spiritual matters is what has bound us together, both of us having grown up in "the church" (her father is a Baptist minister) but searching for answers beyond traditional Christianity. She became involved in earth rituals, something that holds endless fascination for me and I have learned much from her. We both went to school to become Interfaith ministers - she was ordained as it served to enrich her community, while I wasn't - instead I was led to answer the call of writing.

She truly is a soul sister. She had asked me to find a poem that I liked and to read it at the saining, where we also planted an apple tree. (Of course I wanted to write a poem myself, but didn't feel quite "up" to the challenge.) A writer friend suggested I read a poem by John O'Donohue called As A Child Enters the World. John O'Donohue! I hadn't read him in ages - I used his poetry a long time ago in another life.

You know what the funny thing is?  When I got to her house on Sunday morning, she had just been introduced to "this great poet" and was using another of his poem's in the ceremony.

And then, on the spot, half an hour before the ceremony, she asked me to write a call and response baby blessing that her husband would read out loud. GULP. I jumped in and am I glad that I was forced to be "up" to the task!

I will leave you with the words of John O'Donohue, and once again I was struck by the wholly holiness of their community.

As a Child Enters the World
As I enter my new family,
May they be delighted
At how their kindness
Comes into blossom.
Unknown to me and them,
May I be exactly the one
To restore in their forlorn places
New vitality and promise.
May the hearts of others
Hear again the music
In the lost echoes
Of their neglected wonder.
If my destiny is sheltered,
May the grace of this privilege
Reach and bless the other infants
Who are destined for torn places.
If my destiny is bleak,
May I find in myself
A secret stillness
And tranquility
Beneath the turmoil.
May my eyes never lose sight
Of why I have come here,
That I never be claimed
By the falsity of fear
Or eat the bread of bitterness.
In everything I do, think,
Feel, and say,
May I allow the light
Of the world I am leaving
To shine through and carry me home.
Posted by Unknown at 9:14 AM