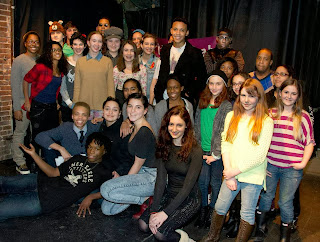 I've been thinking a lot about empathy, and that it is paramount to the survival of our humanity. The kind of empathy I'm talking about isn't just the ability to discern what someone else is feeling, but it's having  the empirical knowledge that the differences between self and others aren't as important as the similarities.

Last week I saw this kind of empathy in action when Writopia Lab hosted a life-changing event at the Nuyorican Poets Cafe on the Lower East Side of New York City.

We had thirtytwo teens come and perform their Spoken Word pieces including five of my Writopia "daughters" from Westchester and Connecticut, and my niece and other Writopians from NYC. One of our teachers has been bringing Writopia to treatment centers, and she managed to bring a few of those writers as well. The evening was nothing short of electric. The teens were all from extremely diverse backgrounds - we had every demographic covered, but we identified with every single one as they were speaking from their most authentic selves.

Those teens were the embodiment of empathy - they were living and breathing EMPATHY.

And of course it's the holiday season that brings about these ruminations. We're told that it's time to connect, yet so many of us feel disconnected. I grew up in the Christian tradition where empathy is the cornerstone, where the birth of Jesus reminds us that we all have God inside of us (Christian or not!). We are called to remember that we are all miracles.

However, the holidays are not miraculous for many people - commercialism is rampant and the divide between the haves and have nots is the greatest. They tend to bring out the best and the worst in humanity when expectations run high and everyone's sense of entitlement peaks.

Entitlement seems to be the opposite of empathy, doesn't it? And in this world we seem to be breeding more of the former and less of the latter. Entitlement separates us from others, separates us from our true selves. And our expectations are so often unconscious! I work hard so I deserve x - well, what if you don't? Who is the arbiter of what we deserve? And what if you don't get x, y, or z?

It's dangerous territory for me as well, and maybe that's why I am so passionate about nurturing kids and teens and their natural, budding sense of empathy, not only through their writing, but through their participation in groups with different dynamics and chemistry. Creating a microcosm of the macrocosm with 3 to 6 other peers. Peers who have the courage to be vulnerable.

If you are struggling, you are not alone. When I was 23 my sense of isolation and misplaced entitlement was life-threatening. It was only through self-discovery and seeing myself in others that I was able to fully come back to life.

And this is why middle school sucks - we desperately want to be like everybody else but we know that we're not, and that's when we start to develop the personas to get us through, and the masks can harden into something that's very hard to take off and we lose the sense of who we are.

So many of us are stuck in a middle school frame of mind!

Writing helps us come back to our sense of self and who we are. And I'm noticing both in kids and adults who are encouraged to write that their masks are more flexible as they grow up.

Don't you think "diversity" should be more of a unifying experience rather than something that separates and "divides" us?

The kids and teens I am privileged to work with remind me of that every day.