Attending the Worldwide Premiere of A Wrinkle in Time! 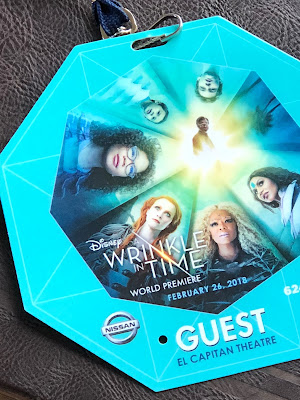 I can’t believe it!!!
Monday night we were part of the celebration in Hollywood at the El Capitan Theater
for the premiere of Ava Duvernay’s interpretation of our grandmother’s beloved classic,
A Wrinkle in Time.


It was stunning! It made me really see that “a book too can become a star”, and my grandmother’s own star is surely twinkling in the heavens as we lead up to her centennial this November. And how wonderful that a book celebrating diversity and community, turned into a film that had all of the colors of the cosmos. I don’t want to give any spoilers, but I can only imagine how hard it was for Ava DuVernay and Jennifer Lee, (and the editors and producers!) to make some of the choices they did for the sake of the narrative and visual story-telling.


For this once-in-a-lifetime experience, we stayed at the iconic Roosevelt Hotel in Hollywood,
just down the street from El Capitan Theater, and the location of the after-party.
(Marilyn Monroe lived here for two years and evidently there are ghost sightings -
rumor has it that Marilyn herself appears in the mirror of room 2000!) 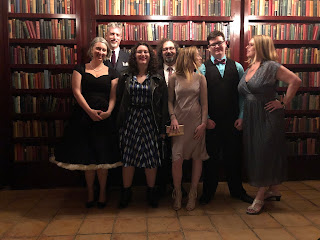 (Pictured here right to left: my sister Charlotte, my brother Edward, my niece Magda, my brother-in-law John, Scarlett, Finn, and me!)

This area of Hollywood Blvd is also where they were starting to get ready for the Oscars next Sunday, so much of the streets were blocked off. The whole thing was a production! We had to walk several blocks to just get across the street to WILL CALL to get our tickets. 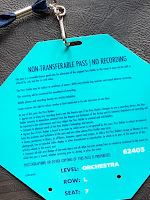 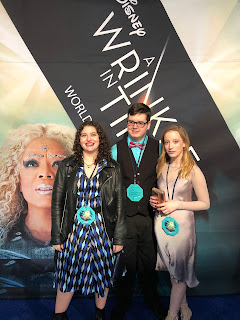 And then we got to walk the BLUE carpet! 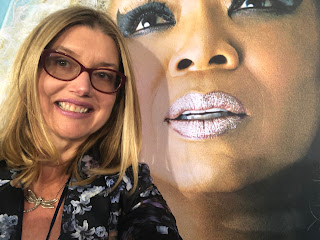 This is the closest that I will ever get to Oprah.
(Okay, I did see Oprah at the after party, but poor Oprah was mobbed.) 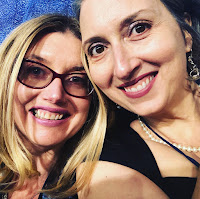 The dress theme was Colors of the Cosmos, so some of the outfits were fantastic.
They had a DJ and an MC to whip up the audience before Ava and the cast took the stage
to say hello before the movie began . . .

Storm Reid was perfect as Meg, capable of transforming inevitable doubts and fears --
that internal darkness -- into something we can all recognize in ourselves, something universal.
Derek McCabe as Charles Wallace was adorable and ethereal.
Levi Miller played a convincing Calvin, hungry to be part of something bigger than just himself.
Chris Pine and Gugu Mbatha-Raw were fantastic as the Drs Murry, while Zach Galifinakis
gave us both humor and pathos as the Happy Medium.
The Mrs W’s were not played as kindly old ladies -
Reese Witherspoon had a fresh take on Mrs Whatsit by making her - well fresh!
She was so much fun. Mindy Kaling was wonderful as Mrs Who had some new quotes
from popular culture which fit in with 2018 and with the demographic,
and Oprah as Mrs Which was presented on screen as larger-than-life and oh so wise. 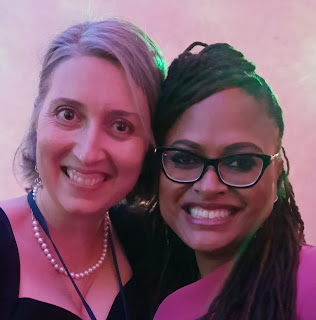 What a gorgeous pic of Charlotte and Ava DuVernay!

The after party was at The Roosevelt Hotel and was off the hook!
They had make-up artists and plenty of photo opportunities, quizzes to take - which Mrs are you?
(I don’t have to take that - I know I’m Mrs Whatsit!) make-up swag and even sterling silver rings!
(I got one that says wild nights are my glory.)

Scarlett with Storm on the left and with the actress from Blackish and Grownish Yara Shahidi.
And then Scarlett and my niece Magda got to take a selfie with the uber-talented and wonderful
Tracy Ellis Ross! 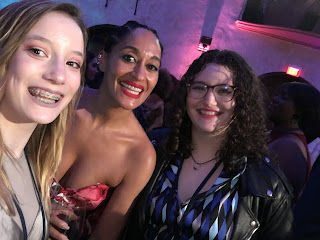 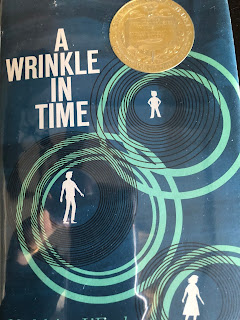 Ultimately, the movie made me love the book even more, and hungry to explore and make manifest my grandmother’s vision for the world, one in which we all matter and we don’t let darkness divide us. One in which we are all light bearers. And I hope it does the same for you!