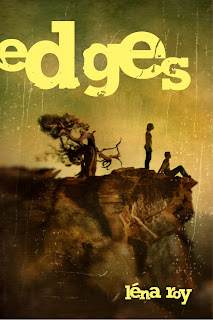 What am I doing right now?  Looking at my Author's Statement again as I anxiously gear up for publication, reviews, and opinions. (People will have them.) So in the interest of transparency, I will share it again. (Unless you want to hear about the pancake breakfast fundraiser at my kids' school today . . . I didn't think so!)

I wrote the first draft in about three months, and then kept revising - for years. At first I was obsessed with the crystal meth problem. I read great books with graphic depictions of the descent into addiction, but nothing about the journey beyond that addiction. I was more interested in asking: what happens when you take away the substance? Or, if like Luke, you just run away? What does it take to remain authentic, to maintain a sense of who we are when our perceptions of the world are challenged?

I write to map the world, and EDGES came from my desire to portray transcendence amidst bleakness, my interest in flirting with the edges of mysticism and insanity, my curiosity in challenging where our personal edges are.
Posted by Unknown at 5:58 PM