The Ghost(s) of Old Katonah 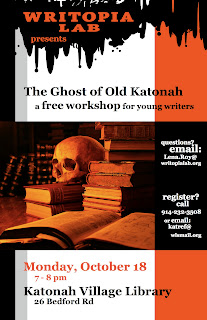 Halloween is coming! Want a great way to get in the mood? Write your own ghost story!

And we've done just that. It was a spooklily amazing evening in Katonah, for sure. Katonah is ripe for it's own ghost story (or several)! It is a pre-revolutionary town, and was originally where the reservoir is today. Back in the 1880's, with the rise of city life "down South" in NYC, people needed more palatable drinking water and Old Katonah was right in the spot where they needed to flood to make the reservoir. So people literally moved their houses. Yup, they dug'em up and wheeled them away. 130 years ago? So there could be ghosts in the "pool", or ghosts in some of the older houses that moved, hmmmmmm?

I had approached the Katonah Library back in September, wanting to offer a couple of free workshops in order to introduce myself (and Writopia) to the community. (Next month I will do a poetry workshop based around my grandmother's opus, A Wrinkle in Time. I created this workshop a few years ago for the Cathedral of St. John the Divine. And I have to say I love it!)

Tonight was the night! There were four creative and excited sixth grade girls from John Jay Middle School, and a senior from Somers High School. Rich from Patch.com came to make the workshop "an event", with his camera and ever-ready pen and notebook.

Write a story in an hour, TOGETHER, with different ages and kids bouncing off the walls? Impossible, some may say. Nay, nay. We brainstormed, and each girl wrote their own part of the story. And we even had time to read it out loud. (Okay, I admit it. We ran 15 minutes late!)

I LOVE workshopping with kids and teens, love watching them fall-in-love with writing and seeing the spark of creativity flash in their eyes and . . . take off! They inspire me!

Email ThisBlogThis!Share to TwitterShare to FacebookShare to Pinterest
Labels: A Wrinkle in Time, ghosts, Halloween, Katonah