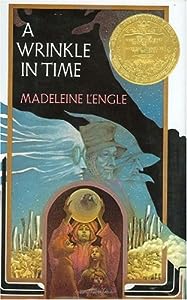 Cover of A Wrinkle in Time
What's on my mind?

My grandmother is to be inducted into the Empire State Hall of Fame next week on April 1st and I have been invited to accept the award on her behalf. She will be honored with the likes of Dorothy Parker, Ralph Ellison, Herman Melville and others. (We will also be celebrating the 50th year of A Wrinkle In Time on February 12th of 2012.) I need to write a short speech illuminating her already well-known contributions to the Empire State and to literature.

I only have 2-3 minutes and there's so much to say!

But I'm also thinking about tomorrow: I will be representing Writopia and leading workshops all morning with 5th graders in Scarsdale, NY at the Young Writer's Workshop. All participants will create a short short story in 45 minutes. Impossible? Nay! Not with Writopia!

There's something about working with 10 year olds that is so inspiring and it also happens to be the age group that is first attuned to A Wrinkle in Time and GETS it.

Ten year olds have a freedom with their intellect and imagination that gets choked as we get older, and develop the inner critic. (At Writopia, we strive to help develop the inner editor!)  A Wrinkle in Time has inspired fifth graders to both read and to write, to enter the world of the impossible. Their imaginations break down those barriers! It's the same with Middle Grade Fiction. You can write about the impossible and have it be believable. Toads can be best friends, wolves can talk, Martians and Venutians can interface. (Wait, isn't that TRUE?) My grandmother had a firm grasp in Story as Truth, something that fifth graders inherently know.

And what about Meg? The groundbreaking (in 1962) FEMALE protagonist and math nerd who is our unlikely heroine. How many generations of fifth graders has Meg inspired to be whatever they want to be?

Okay, this is short, but there will be more ruminations all week long as I PREPARE for Friday night, which also happens to be my 12th wedding anniversary! (Yes, I am leaving the kids with my mom, and bringing HIM!) The next day, I will put my own author hat on for the Festival and represent Edges to the best of my ability, but on Friday night, I am all about being the gushing granddaughter! (And doting wife . . .)