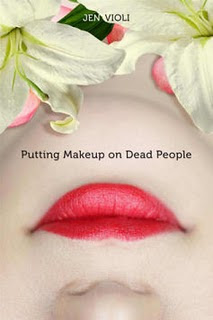 Mortality seems to be on everyone's mind, with the "closure" afforded by the death of public enemy number one.

But it's never that simple. Books have always been a flashlight on a sometimes dark path for me, and after 9-11, I turned to Tolkien's The Lord of the Rings Trilogy to cope.

Is it a coincidence that I just read Putting Makeup on Dead People for review? Is it appropriate that I'm thinking both about Osama Bin Laden and this lovely coming-of-age book that deals with the questions of how to move on and  how-to-say-goodbye?

Three weeks from today, Putting Makeup on Dead People by Jen Violi will hit the shelves.

I "met" Jen Violi on-line through another on-line writer friend Lish McBride a year and a half ago. We were the debut YA author trifecta: with Lish first on the scene closely followed by me, and last but not least, Jen.

Her book comes three weeks from today on May 24th.

I have spent the last 18 months becoming more and more convinced that Jen and I are soul sisters. She studied acting in college, and has a Masters in Theology as well as an MFA in Creative Writing. She has devoted her life to marrying these three things together in her work with others. (Sound familiar?)

Therefore, it was very difficult to WAIT to read Jen's book, but I finally got my wish last week. When the package came from Disney Hyperion, I was knee-deep in my Girls Write Now Anthology-reading marathon. And even though my eyes were burning by the time I was finished reading the GWN submissions,  I couldn't help but crack open Putting Makeup on Dead People, when I should have turned off the light and gone to sleep.

In the spring of her senior year, Donna Parisi finds new life in an unexpected place:  a coffin.

Since her father’s death four years ago, Donna has gone through the motions of living:  her friendships are empty, she’s clueless about what to do after high school graduation, and her grief keeps her isolated, cut off even from the one parent she has left.  That is until she’s standing in front of the dead body of a classmate at Brighton Brothers’ Funeral Home.  At that moment, Donna realizes what might just give her life purpose is comforting others in death.  That maybe who she really wants to be is a mortician.

This discovery sets in motion a life Donna never imagined was possible.  She befriends a charismatic new student, Liz, notices a boy, Charlie, and realizes that maybe he's been noticing her, too, and finds herself trying things she hadn’t dreamed of trying before.  By taking risks, Donna comes into her own, diving into her mortuary studies with a passion and skill she didn’t know she had in her.  And she finally understands that moving forward doesn’t mean forgetting someone you love.

Jen Violi’s heartfelt and funny debut novel is a story of transformation—how one girl learns to grieve and say goodbye, turn loss into a gift, and let herself be exceptional...at loving, applying lipstick to corpses, and finding life in the wake of death.


Well played Violi. Well played. I went to sleep having made a new friend in Donna Parisi and woke up the next morning eager to continue reading, indeed, to finish the book. We are privy to Donna's personal transformation through grief: it is a journey, and not just a story. Violi draws a character whose emotions are palpable, real. Donna is unable to say goodbye to her own father, but finds solace, letting go and hope in helping others to say goodbye.

Violi and I share a similar spiritual point of view - that the world is full of beauty and mystery, and that the strongest transformational tool is taking actions and being of service to others.

I can't rejoice in Bin Laden's death because all I can think about is the thousands of people who died at 9-11, and the thousands of troops who have sacrificed themselves. Life and death are BOTH complicated.

So I will take a page from Violi's book today and be of service to the living, guiding my focus towards cautious optimism, and being the best person that I can be.

Thank you Jen: for your book AND for your friendship. When we meet face-to-face some day, I am going to hug you so hard! xoxoxox