Father's Day: What would The Doctor Say? 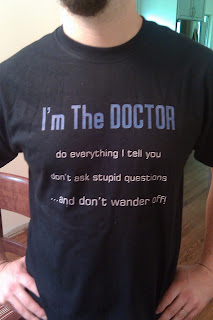 Happy Sunday and Father's Day everyone! I hope you all have glorious plans. The husband let me take a pic of him from his goatee down to show off his Father's Day present:

Yes, those of us in the older Roy clan, from age 9 and up, are die-hard Dr. Who fans.

Today promises to be lovely: outside time, yoga, the town pool, and celebrating the third birthday of a delightful little girl with close friends.

We are in summer mode, with only one week left of school.

There is always so much to write about! There is a tremendous opportunity here for someone to write a post about whether or not Dr. Who would make it as a dad - would somebody write that?


But I need family time today, so I will hark back to Friday, and post a couple of links.

I guest posted an audition story on A Year of Auditions, a  blog started by debut author Stasia Ward Kehoe in anticipation of her upcoming YA novel Audition, out in October. I was an intense thirteen year old, choosing Nina's final monologue from Anton Chekhov's The Seagull as my audition piece for The High School of Performing Arts. Here is a teaser of my post:


Why did you say you kissed the ground I walked on? You should have killed me instead. I’m so tired! I want to rest, I just want to rest. I’m the seagull … No, that’s not it. I’m an actress. That’s it.
This was the beginning of my monologue, the one I used for my auditions for acting camp and the High School of Performing Arts (now LaGuardia) back in 1981. I was thirteen.

What possessed me to pick one of the most challenging monologues, from The Seagull by Anton Chekhov to do over and over again? This epic romance of a tragedy appealed to me on so many levels: it is a play for actors and writers, and Chekhov shows us the different artistic archetypes through his characters without telling his audience what to think.

I blame my grandparents for my love of the classics and the theatre. They met in the early 1940’s during a Broadway production of Chekhov’s The Cherry Orchard after all. My grandfather, Hugh Franklin, an actor from Oklahoma, was playing the role of Trofimov, and my grandmother, Madeleine L’Engle, was an understudy and Eva LeGallienne’s secretary.

And tomorrow is my birthday! So don't forget to enter the contest to win either one of two audio books or a signed hardback copy of Edges! Contest ends next Monday, June 27th at 6PM.

Hope everyone has a wonderful day!