Image via Wikipedia
It was a wonderful day for a book event at Washington Irving's Sunnyside. The weather channel had threatened rain all weekend, but it turned out to be a beautiful Indian Summer day with plentiful sunshine gracing the rolling hills overlooking the Hudson River.

Sunnyside, the mansion where Washington Irving lived, is in Irvington (surprise!) next to Tarrytown. My family and I arrived early, and I was whisked off to see where I would be sitting - alongside Judy Blundell (who recommended me for this event) and Peter Lerangis of 39 Clue fame. That's right - Edges was in fantastic company, as Judy also writes under the name Jude Watson (Watson being her married name) with Judy's lexicon of work and all of the 39 Clues books.

I had a few minutes, so I walked around, saw other wonderful authors talking to young readers and their parents. (This event was mostly for a younger audience: I think that Judy and I were the only ones representing the YA scene!) 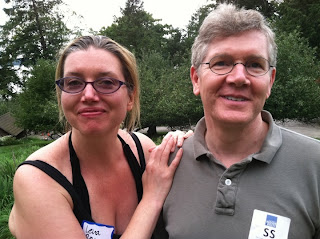 Imagine my surprise when a man genially walks up to me and asks if I am Léna Roy. Why yes, yes I am. (There was a HUGE picture of me that went along with the cover article of the Westchester Journal Weekender.)

"Did you go to Kent boarding School?"

"I'm Chris Dee, I'm married to Barbara Dee, and I was your 9th grade English teacher."

Holy cow! I'm getting goosebumps just writing this. What a small world! Barbara Dee and I had only recently become Facebook and Twitter friends and have been trying to set up a coffee date. It turns out that Barbara also taught at Kent when I was there - but was never my teacher.

Kent boarding school. The WRONG place for me. It was a disaster. I was incredibly miserable and can't believe that I lasted even two years there. But that's another story. 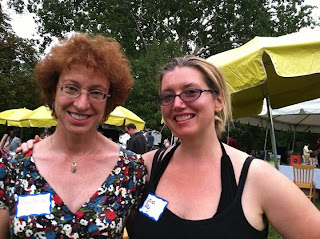 Barbara and I gave each other a big hug, promising a long coffee date in the next week or two, and then it was time to sit at my table from 2PM - 4:30PM. Some of my Writopia students came, and it was lovely talking with people about books and the process of writing, and how important building community is.

This was such a wonderful event, supporting Westchester authors and the people who love them. I did not however, get to talk to everybody I wanted to, but it was tough to be pro-active when there were just so many people I wanted to meet. And yes, I was  too chicken to approach Gail Carson-Levine. Next time, I promise!